Awakening the Economy of Eid 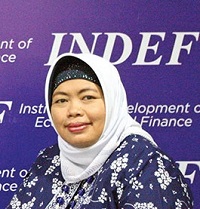 Apart from encouraging people's purchasing power which has decreased due to the pandemic, it is no less important to protect the domestic market from the onslaught of imports in order to optimize the momentum of Eid to become an economic lever.

Ramadan and Idul Fitri or Lebaran are moments eagerly awaited by the public, both the general public as consumers and business actors. This is because workers are waiting and hoping to get holiday allowances. Likewise, business actors, from micro, small to medium-large, hope to reap profits during Eid. Traders usually target one month's sales turnover, where there is Eid, around 30-35 percent of the total sales for one year.

Eid does not only have a dimension of religiosity. The economic dimension of Lebaran is very thick. The economy of Eid has even started since the month of Ramadan. Most of the Muslim community will prioritize their consumption, starting from the smallest thing, the quality of food consumption during the fasting month. Not surprisingly, vendors of various kinds of food line the streets. The peak is of course during Eid, people are willing to dismantle all their savings or break piggy banks for the joy of celebrating the holiday.

When Eid arrives, various special dishes are available for almost all families, including the tradition of "having to" wear new clothes during Eid. In fact, some people are willing to go into debt to be able to carry out the Lebaran tradition of homecoming. The homecoming tradition occurs throughout the archipelago, even going home to Indonesian workers who seek their fortune in a number of countries. Under normal conditions, Eid is always a huge economic lever.

In the midst of the Covid-19 pandemic, the economic luxury of Eid has certainly receded. The enthusiasm of the community to give priority to various iftar and sahur menus must be adjusted according to household financial conditions. In fact, the desire to buy Eid clothes had to be postponed. Whether or not there is a ban on going home, the passion for consumption is still low. The reason is, people's income is still dropping so that their purchasing power is still very limited.

In the midst of weak people's purchasing power, the government must seriously take "safeguards" so that the Eid al-Fitri momentum is still able to leverage economic recovery. Most importantly, of course, to maintain price stability of basic necessities so that the low purchasing power of the people is not eroded by pressure from rising prices or inflation.

Another step that is no less important is protecting the domestic market from the onslaught of imports. The movement to increase public consumption must be optimized in order to absorb domestic products. Moreover, many business actors or micro, small and medium industries (UMKM / IKM) have gone out of business due to the pandemic. The economic momentum of Eid should be able to be used to encourage the revival of MSMEs and IKM.

The main thing is to safeguard labor-intensive industries so that they can immediately re-absorb the large unemployment rate. The textile and textile products (TPT) industry is an industry capable of absorbing more than 3.94 million workers. Moreover, the opportunity for people to buy clothes once a year during Eid must be enjoyed by IKM.

Unfortunately, imports of various types of clothing, such as casual and formal tops, bottoms, overalls, outwear, headwear, and baby clothes are free to enter without the imposition of tariffs or non-tariffs. In fact, before Lebaran, the flood of Muslim clothes, including koko shirts, robes, hijabs, and prayer rugs, was extraordinary. As a result of the onslaught of imported clothes from China and Thailand at low prices, IKM is increasingly under threat. It is not surprising that in the fourth quarter of 2020, the textile and apparel industry fell by 8.8 percent and hundreds of thousands of people were forced to lose their jobs.

This condition occurred not only because of the weak safeguard trade policy for the domestic market, but also the paradoxical policy. The government should have implemented a tariff structure that is aligned from upstream to downstream. Ideally, the imposition of import tariffs on downstream products must be greater than the import tariffs for upstream products, including the imposition of temporary trade security tariffs in the form of safeguards or imposition of import duty on security measures (BMTP).

However, in fact, the current structure of the textile import tariffs is reversed, the tariffs on the upstream and intermediate sides are higher than those on the downstream side. In fact, for downstream products originating from free trade partner (FTA) countries, such as China, there is no imposition of import tariffs. Almost all export destination countries for Indonesian TPT wear safeguards or BMTP to protect the domestic market because they are still allowed by the WTO.

In fact, the imposition of BMTP for apparel will certainly have a multiplier effect on national economic growth. The reason is, this will strengthen the domestic IKM because both large-scale industrial brand and non-brand clothing carry out the core and plasma system (makloon) to the IKM.

Indonesia with a population of more than 270 million people is certainly a big target market for world textile producers, especially during the Eid al-Fitr momentum. In the midst of the low purchasing power of the people, it must be optimized to protect the market from the onslaught of cheap products, including closing the entry of used clothing imports which are widely traded through online shopping platforms and social media. In fact, the import of used goods has been prohibited in the Regulation of the Minister of Trade (Permendag) Number 51 of 2015.

So, if the government argues that the entry of cheap imported goods without BMTP is expected to spur an increase in public consumption, this is a misguided logic. Especially now that imports of apparel are dominated by cheap products that are IKM's competitors, only about 5 percent of classy or branded products.

The people's purchasing power will soon recover if jobs are available. This only happens if the products of MSMEs players, which are 99 percent of which are sold, are purchased by the public. Thus, in order for economic recovery to occur, it is not cheap products that are needed by the community, but to create jobs immediately. If labor-intensive industries arise (including the textile industry), people's purchasing power will certainly also be increased.